IKENGA,inc.,
Your Question ? my Answer ! 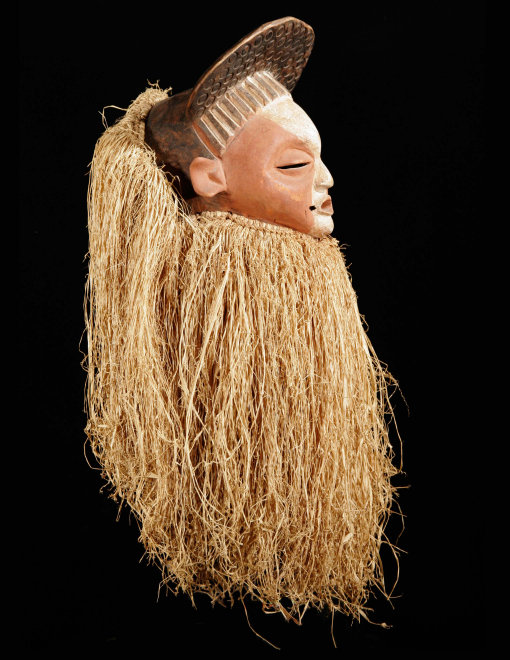 Cyber Museum Gallery
Holo / Congo Republic /Mask Mwela Mbambala
Characteristics: The Matemu mask is a helmet-mask with long raffia fringes and a face decorated in polychrome pigments. A variation with horns or crests are called Mwela Mbambala. These masks are much smaller then the Matemu mask.
They live in the Southwest of Congo Republic on a hilly Savanna with a few pockets of forest.
The Holo are mainly matriarchal. The ruling queen ( Diya Mukhetu ) exercises undisputed authority over the tribe .
The queen , Diya Mukheto, presides with undisputed authority over the Holo. Several sub-chiefdoms are under her sole jurisdiction.
The Holo are divided along a caste system: the most important, and highest ranking group, the Tulamba, or the chiefs of the earth, are considered to be the original settlers.
The Mbanza, decedents of a later wave of immigrants take the second ranking.
A third group in made up of freed prisoners and slaves.
Linage is all important and determines the statues in Holo society.
Holo men are hunters, and talented blacksmith, while Holo women are charged with agricultural duties .
Animals such as birds and turtles are incorporated into protective charms.
The Holo are primarily influenced by their neighbors, especially the Imbangala from whom they received the sacred Kalolin. Influential groups are the tshokweized Suku, the Yaka as well as several other Congo tribes.
Their masquerades and circumcision ceremonies are of Yaka origin. Their language , Kiholo is based on that of the Tshokwe.