Back to
Gallery
Picture 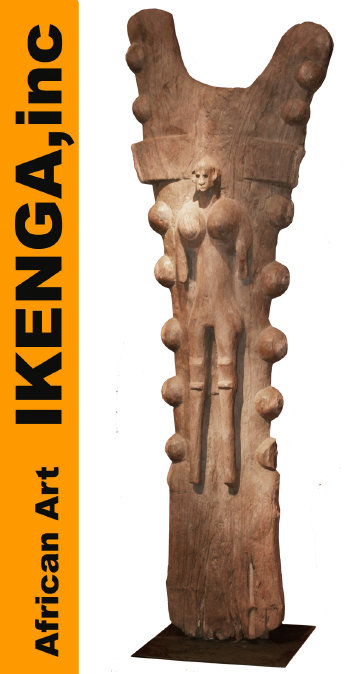 Dogon, ToguNa Mens Meeting House Post
early 20th Century / Collected in Sedourou, Mali
H 7' X W 27" X D 7" ( inches )
This ToguNa post originates from the village of Sedourou , and used to support the south west side of the village ToguNa, or mens house.
Sedourou means  wild cat from  sie, probably a serval, living in the wild along the Ireli Canal in the Seno Plains region of Mali.
In their extensive field research in the early 1970' s about the ToguNa , Tito and Sandro Spini concluded that the structure, and position of the ToguNa among the Dogon served as a series of communication post relays, originating in the Seno Plains and extending northwards to the Bandiagara Cliffs, with each ToguNa illustrating specific important central themes pertaining to the Dogon beliefs.
This ToguNa post pre-dates those documents by the Spinis in 1972, which were carved as replacement pieces for the meeting house from which this earlier post came.
The masks and the men who wear them are the theme of this ToguNa, or mens house, from which this post comes, and are thought to relate to the Dama, a celebration which occurs only every sixty years, when the star Sirius is present in our solar system, and our sun and moon are in specific positions.
This is intriguing, considering that Sirius is not visible to the naked eye, and was only discovered and viewed by telescope in 1718. Yet, the Dogon knew of it, and have incorporated it into their ceremonial life as early as the 11th century.
The society of masks plays a central role in these important ceremonies, and serve as a link to the ancestors and spiritual forces which govern the Dogons ceremonial and daily lives.
The post on hand depicts the Tinge-Tanga or  mask on Stilts .
The rounded forms along the side edges of the post are sought to represent breasts, and act as a warning to women not to enter the ToguNa nor to stand near the masks, as doing so may cause sterilely or miscarriage.